The day started off in 3D purge energy in the beta frequency range giving us a highly alert and focused state of mind. At 0030 5D light coding showed up in the delta and theta ranges, puting us in in a drowsy mind state similar to the first stage of sleep. From 0430 until around 0630 a horizontal density line formed up in the uper theta range and ended when the 5D light coding dropped back into 3D purge energy. The 3D purge energy resumed in the beta range and carried on until 1300 where a very large 5D light coding spike began. That spike quickly climed into the gamma frequency range, giving us a peak focus and extended consciousnes state of mind. The 5D light coding hit its peak around 1600 in a complete white out that registered 68 in amplitude, then after 30 minutes or so it begain to come back down. It seemed to try and level off in the alpha frequency range between 1700 and 2100, giving us a focused and alert mind state. Then continued to drop down just before 2100 there was a quick spike back into the beta range just before dropping down into the theat range. From 2130 to 2200 we had 5D light coding flickering in and out in and 3D purge energy in the beta range. 5D light coding returned in the theta range to end the day. I was told by a friend who has really helped me understand the Schumann Resonance and how to read the graphs. She told me those vertical likes evenly spread out that have been showing up the past few days is technology showing up on the graphs. I was told to think matrix when I think about it. It is unclear if HAARP has an effect on this or not, or if it is something eles. I will keep you informed when I receive more information. 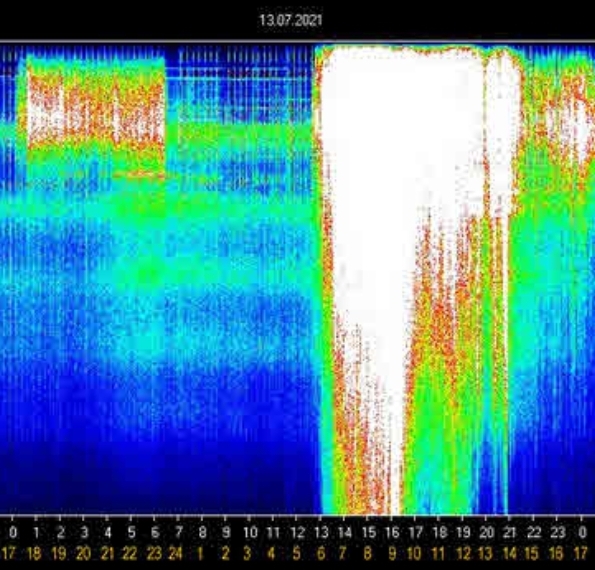